Does anyone know where I can find an assembly directions page for this model? My box didn’t come with any, and I REALLY don’t want to. The Blood Slaughterer, also known as the Blood Slaughterer of Khorne, is a large, gore-splattered Daemon Engine made of brass and black iron that is. DO NOT post full rules quotes from the BRB or Codexs, as we do not want any The blood slaughterer is going to slaughter your bloody. 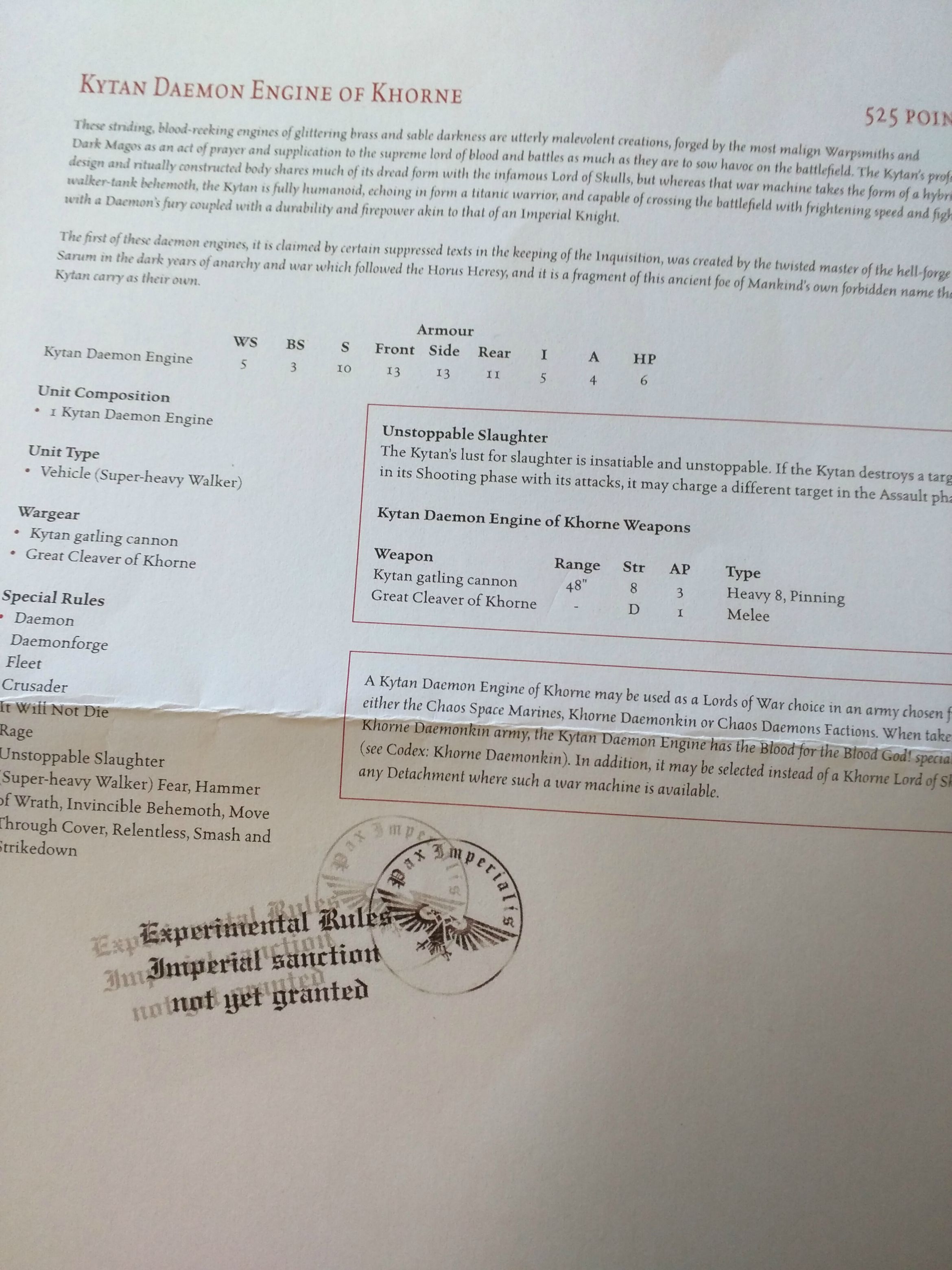 I have tried the URL there but no joy.

The patch on the 6th of March was kind of blah. I would love to have more of them but time, money, availability, and desire all factor in. So using the blood slaubhterer model as a counts as mauler fiend sounds good then. Or again, let me go through and scan issues and share them. In Rogue Trader it was an automated robot thing whose final appearance was in the Vehicle Manual.

Are Khorne Blood Slaughterers any good?

Look at all this nonsense. Now if he ordered it direct from FW they will help more likely but if not could be trickier.

Posted by Captain Rufus at Tuesday, March 04, 2 comments: Not ridiculous by any stretch.

Hilariously back in 1st Edition and early 2nd Edition the Blood Slaughterer was a small Daemonic robot of Khorne on two wheels rather than the humongous robo-tick of doom. They do look kinda cool and impaling a big critter seems like fun.

Of note is the official GW logo designs used on some of these pages. This means, in true Daemonkin style, the more your units die, the stronger they become! In match if you get your Cheevo Achieved the game will both tell you in the lower left hand corner, and that big blue bar pops ruls in the lower center in case you are ignoring most of the amber text. We finish blooe with the Blood Slaughterer as Inquisitor thinks it should be. It was basically their house magazine to support their resin models of Epic scale Warhammer 40, miniatures they had some weird license with Games Workshop to make amongst other companies.

Even at GW prices! Within 2 years the Vindicator, Whirlwind, and Falcon would have official Games Workshop releases, the Termite basically put into the mists of history, and the Stomper slaughteeer get a kit in about 12 years for 40 dollars more. Probably a way to get a bunch of mechs for real money.

Are Khorne Blood Slaughterers any good? Today I will show you them in my own photographs and not scans because anyone with any experience with Games Workshop knows how they can be. What this magazine is supposed to be. Privacy policy About 1d4chan Disclaimers Mobile view.

Seems fairly legit and thought out. Make sure you keep your eyes peeled for the next instalment of Tactica: The Blood Slaughterer is a Daemon Engine, a possessed war machine created with the single purpose of wreaking carnage on the enemy with unnatural Warp eules resilience and power.

Also I believe it kind of explains the development team as well since they come from Vancouver up in Canada. Seriously I dare you come with a more stupid name than Blood Slaughterer, well okay GW already did that with the Bloodsecrator. Daemon Engines of Rulrs If so, how many would you take, a full full squad of 3? The Lash was a powerful energy whip, crackling with energy, the iron claws at the tip of each whip dripping in corrosive venom.

Personally as a balls to the walls Khornate Combat lunatic my favourite loadout is the standard with 2 siege claws with inbuilt Heavy Flamers.

How would a khorne mauler fiend set up look like? Dear Prince Victor Steiner-Davion, why won’t anyone love us? And you know, most of your fellow players are probably your friends at this point. Basically, they were amazing; still, they could still get kited by jetbikes and the like because of the requirements of 5th Edition Rage rules, but whatever they touched would be guaranteed dead!

Inquisitor has a LOT of these in nearly every issue. They still sell it, currently for 20 US Dollars. So next issue will be full of Datafaxes!